For some time now, ANTONINI has included tempering lehrs alongside the well-established annealing and decorating lehrs in its production program in order to meet the needs and demands of its Customers. ANTONINI has succeeded in developing a new technology that has led to the development of the latest generation tempering lehrs.
This new type of lehrs allows to obtain for the tempering of any type of glass, the same productivity and quality that are encountered in the annealing and decorating with the use of Antonini lehrs.
Once again, ANTONINI has been able to meet Client expectations of proposing a product that is distinguished in the world thanks to its quality and refinement.
Developing this new technologygot ANTONINI involved in a 360 °project which saw all the resources employed in the quest for advanced components in the electrical and mechanical design, to finally reach the installation and final testing of this type of machine. In this last phase, all of the improvements that enabled to reach this high quality level were tested.
The ANTONINI tempering lehrs can essentially perform the on-line or off-line tempering. They consist of a tunnel composed of a series of heating modules (whose number and type depend on numerous factors such as the daily production, the type of item, the type of glass, etc. ..), each equipped with air recirculators, ANTONINI gas burners and automatic temperatures detection and adjustment system. In the off-line lehrs, the decoration of glassware is performed in the first modules, where there is also an air intake system. In the last part of the tunnel, the glass undergoes a thermal process of gradual heating until it reaches 700 °C. Immediately afterwards, special section blowers at the tunnel exit act on both the upper and lower part of the glass, causing a sharp reduction in temperature and giving rise to the surface tensioning of the tempering. Next, other section blowers cool the glass down once again to a temperature slightly higher than room temperature. The flow of cooling air is obtained through powerful centrifugal fans that are regulated independently by inverters. In on-line lehrs instead, the first zones behave exactly like a normal annealing lehr then, bringing the glass to gradually reach 700 ° C in the last zones, the lehrs perform exactly as in the tempering off-line lehrs. 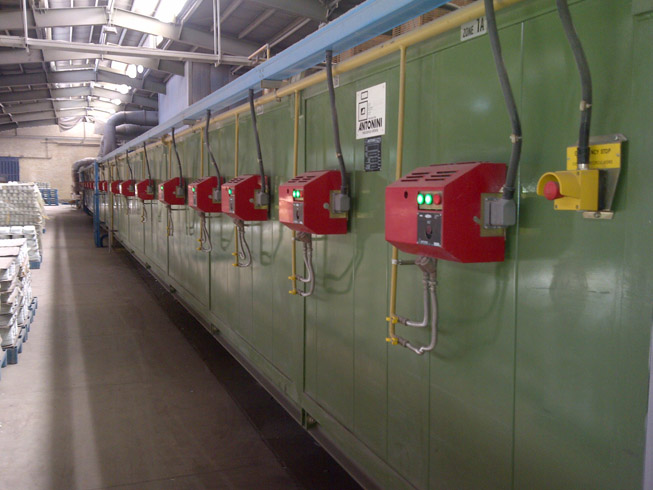 Customers who have installed the new ANTONINI tempering lehrs , found an increase in production, a net decrease of breakages of articles during and after hardening, improved quality of the decoration, of the  annealing and toughening. All thanks to an accurate control of the temperature in the tunnel and to an improved distribution of air in  tempering zone at the tunnel exit.
Articles tempered in the ANTONINI tempering lehrs can stand up to ΔT of 160 °C and ensure results above to the standard impact test.
The same off-line and on-line tempering lehrs testing technology can also be applied, for building special lehrs where, for example, two different item types can be hardened simultaneously.